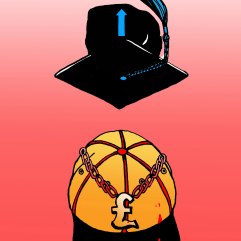 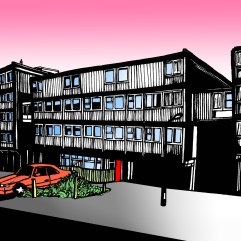 Highly skilled designer and illustrator Matt Ferguson, MAGDC student 2015 was selected to provide the design and identity for the board game, “Life is What U Make It”

Competing with fellow MAGDC classmates Matt provided these atmospheric drawings for the physical board game and its component parts as well as the logo and branding.

The board game was created by 15 year old Osmond Gordon Vernon in conjunction with a project called The Agency at Battersea Arts Centre.

“The Agency is all about giving young people from estates in Battersea strategies and networks in order to make their own ideas and projects happen in their own area. Last year Osmond took part in the creative methodology of the Agency to develop a crime prevention board game based on his estate and his own experiences of gang pressure. He pitched his idea to a panel and received £2000 to realise it.”

Both Matt and the MAGDC course felt it was a creatively open and socially important project to involve ourselves with. Through this project Matt has been introduced to the networks and goals of Battersea Arts Centre and its local community, not to mention a 15 year old client! The National press recently interviewed Osmond and Matt about their ideas and ongoing creative collaboration.